"Upon a prolonged observation my work aims to unveil and communicate something of a metaphysical nature, an essence or a power that exists at the ebb of life, as principles, dealing with the question of the nature of our existence." Daniel Lipstein is a printmaker and painter, member of The Graphic
Studio Dublin since 2002. Upon his graduation in 2006 from the fine art print faculty of NCAD he received the CAP Foundation award that allowed him to do large scale paintings in 2007, in 2009 he graduated from the MFA course
in the same faculty in NCAD.

Daniel exhibits regularly in galleries such as the Graphic Studio Gallery, the RHA Annual Exhibition, the Printmakers Gallery,
and SO Fine Art Editions. His work is held in numerous public collections such as the Office of Public Works, the National Botanic Gardens and Galway City Council.

He won several awards including the K&M Evans award for painting in the RHA in 2017 and first prize in the Biennial fine art print competition, ‘Impressions’ at Galway Arts Centre in 2010. Daniel is teaching a comprehensive traditional printmaking course at Trinity Art Workshop, Trinity
College Dublin. 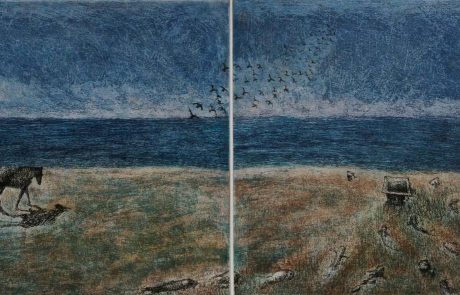